The Steampunk genre finds its roots in the writings of authors like H.G. Wells, Jules Vern, and the visualization of Disney’s 20,000 Leagues Under the Sea. Wikipedia describes Steampunk as:

… a subgenre of science fiction and fantasy literature, but has developed in recent years to become a craft and lifestyle movement that commonly features some aspect of steam-powered machinery. Although its literary origins are sometimes associated with cyberpunk, Steampunk is often inspired by the industrialized Western civilization during the 19th century. Steampunk works are often set in an alternative history of the 19th century’s British Victorian era or American “Wild West”, in a post-apocalyptic future during which steam power has maintained mainstream use, or in a fantasy world that similarly employs steam power.

The best part of these pens can be the barrels. The metal barrels of each of these pens have been hand crafted, and uniquely designed for each person. After they are made each one is individually cast in an optically clear,  UV resistant resin that protects the barrels. We are able to add small details like small messages, initials, or even special dates like anniversaries or birth dates. 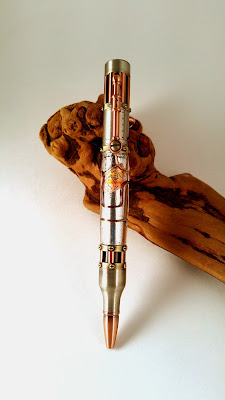